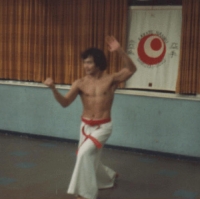 As can be seen from the ‘Development of Sankukai’ family tree Sankukai is a Shitoryu based style of karate. It is a young, fast flowing style of karate that is very aware of its traditional roots in both Naha-te and Shuri-te. However, it also incorporates modern thinking through Shukokai’s scientific analysis and development of speed and power in technique and Nanbu’s modern approach to karate along with his expertise in aikido, judo and traditional weaponry. As students progress towards dan grade the use of aikido derived techniques become more apparent.

The two main features that typify Sankukai and differentiate it from many other styles of karate is its emphasis on evasion techniques and circular movements. These are represented on the Sankukai emblem with three circles (Sun, Moon, Earth) aligned at an angle of 45° from vertical, the typical angle of evasion. While other styles of karate employ evasion techniques (tai sabaki) and spinning attacks, Sankukai differs in formalising these and teaching them not as high grade variations but as basic techniques on the training syllabus right from white belt. Whilst we still employ jodan uke (age uke), soto uke, uchi uke and gedan barai, the Sankukai equivalents could be seen as tenshin jodan uke, tenshin chudan uke and tenshin gedan uke – all evasion techniques employing circular blocks. The circular theme continues with circular hand and foot strikes – kaeten tsuki and kaeten geri. Circular actions also govern our way of training. Basics and pair work are practiced on a circular plan. After attack/defence the karateka will turn and attack/defend in the opposite direction using the other side of the body. This can be seen in the execution of randori-no-kata (pre-arranged pair work). The Sankukai equivalent of Pinan kata, known as Heiwa kata are adapted to incorporate both evasion and circular techniques.

At the heart of Sankukai are the randori-no-katas. These are set routines for two karateka with pre-arranged attacks and defences. Most of them have the same sequence of attacks with varying defences and counter attacks. Randori-ichi-no-kata has counter attacks using punches, randori-ni-no-kata has counter attacks using kicks. Randori-san-no-kata makes use of foot sweeps and take downs. In randori-yon-no-kata the influence of aikido can be seen in the wrist locks and throws. These are the four main randori and are based around the tenshin evasion blocks. Kaeten randoris make use of spinning hand and foot striking techniques. Randori-no-katas are are executed in a circular manner. The attacker starts in hidari  kamae (left guard) and after his attack he steps and turns to face his opponent in migi kamae (right guard). After his next attack ha turns to face his opponent back in hidari kamae, and so on. The defender also steps and turns but is not required to change guard.

Kata is central to Sankukai, just as it is to most other styles of karate. The first basic Shihozuki and Taikyoku (also known as Junino) kata are taught and are standard to most Shitoryu based systems. The Sankukai equivalent to these are the Shiho-uke katas. These are known as Sanku katas when practiced with two attackers. They utilise tenshin blocks. Kaetens are practiced in kaeten tsuki kata and kaeten geri kata.

The Sankukai equivalent of the Pinan katas (or Heian katas) are the Heiwa katas. These are rather more difficult to learn than pinans due to the spinning techniques and evasive blocks. As can be seen from the grading syllabus, Sankukai practices a fairly wide range of major katas.  The only two katas on the syllabus that are exclusively Sankukai are Shinsei (derived from Gekkisai-dai Ichi) and Tazima. Therefore Tazima is an important kata in the style and must be performed by those attempting to pass their shodan black belt grading. The other major katas demonstrate Sankukai’s heritage of both Naha-te and Shuri-te systems. Many of these katas date back to the nineteenth century and some much older.

Yoshinao Nanbu was born in February 1943 in Kobe, Japan. He was born into a family tradition of martial arts; his great-grand father was the sumo wrestler Kochiza Tanigoro (1827-1871) who attained Yokozuna (grand champion) and his father M. Hideyoshi Nanbu was a 5th dan Judo. Hideyoshi was Japanese forces champion and taught Judo to the Kobe police force. At the age of four Yoshinao Nanbu started to learn judo from his father. In the following years he learned kendo from his uncle and then karate and aikido under sensei Someka. Nanbu eventually attained the grade of 3rd dan in aikido. He also studied the traditional weapon systems of tonfa, nunchaku, bo and sai. At the age of eighteen Nanbu went to the Faculty of Economic Sciences in Osaka and began training in Shito-ryu karate under Chojiro Tani, a student of the founder of the style, the renowned karateka Kenwa Mabuni. Nanbu soon became captain of the university karate team and in 1963 became Universities Champion of Japan, an event with 1250 competitors. It must be realised that in Japan university karate is the backbone of the nation’s karate systems. From the entrance into Japan of the earliest Okinawan karate instructors, most notable karate masters have held university teaching posts.

In 1964 Henri Plee invited Nanbu to Paris after seeing him perform whilst on a visit to Japan. (Plee can be thought of as the father of European karate. He pioneered karate in Europe in 1948.) Many French karateka showed interest in him and Nanbu was soon made coach to the French national squad, who were at the time the strongest in Europe. Nanbu introduced the virtually unknown technique of ashi-barai (foot sweep) and it was used by the team with great effect. The following year, 1965 Nanbu made his first visit to Great Britain.

Nanbu broke with tradition in 1966 and became the first Japanese karateka to participate in a European competition, risking the then reputation of the unassailable Japanese karateka. He entered the French open national Cannes Cup. After sweeping his way through the opposition he met Patrick Baroux in the final. (Baroux later became European champion of 1966 and 1967). The outcome of the fight was immortalised on the cover of Henri Plee’s book ‘Karate – Beginner to Black Belt’ (pub. Foulsham & Co. 1967). Baroux lies at the victor’s feet, victim to Nanbu’s ashi-barai. Another World renowned karateka that Nanbu beat on his way to the final was Domonique Valera. Years later in 1991 Valera was asked during an interview in ‘Fighting Arts International’ for his memories of fighting Nanbu. Valera stated, ‘…..he was the first Japanese who succeeded in impressing me with his training – the first. I haven’t seen any others since the who impressed me in the same way, because Nanbu was a real fighter…..yes a real fighter.’

Towards the end of 1966 Nanbu returned to Japan to study Shukokai, the new system being formed by Tani with Shigeru Kimura. He came back to Europe briefly in 1967 and at this time introduced Shukokai to Great Britain. This included his own individual variation and adaptations. These included the open-handed hikite across the body as a guard instead of the fist pulled back to the side of the body. Nanbu was back in Europe again in 1968 and assisted at Kimura’s open course in Shukokai at Chigwell, Essex in 1969. To those present, who had trained with Nanbu before, the difference between his individualistic approach and that of ‘mainstream’ Shukokai was obvious. In the same year the Shukokai Karate Union was formed. Although Tani was made President and Kimura Vice-president, with no mention of Nanbu, he was later listed as Chief Instructor in the prospectus for the residential course at Lilleshall. The same year he was also made president of the Scottish Federation of Karate and the Norwegian Federation of Karate and technical director and advisor to the Belgian Federation of Karate and the Yugoslavian National Team. After returning from teaching in Canada, Nanbu, at the request of Tani, organised the 3rd World Shukokai Championships in Paris in October 1969. After these championships Nanbu resigned from Shukokai.

Although he was keen to return to Japan and formulate his ideas on karate, there were three main reasons why his decision to split came at this time. Firstly, there was increasing political unrest in French karate. Secondly, there was growing pressure for him to conform to set conventions and methods in Shukokai and finally, Nanbu was becoming disillusioned with the growing emphasis on sport karate at the expense of the art. In 1970 Nanbu launched his new karate system and named it Sankukai. One of the top Shukokai universities in Japan, the Shimane immediately changed to Sankukai. Nanbu then returned to Paris and opened a Sankukai dojo. From England Alan Hunt, a second dan with the Shukokai Karate Union came to train with Nanbu. He changed to Sankukai and after being graded to third dan he set about forming a British Sankukai association. In 1970 the British branch of the Association International Karate Sankukai – A.I.K.S.(GB) came into being.

During the 1970’s Sankukai became the world’s fastest growing style of karate and by 1975 was practiced in forty three countries. In November 1975 Nanbu and his assistant Ryozo Tsukada gave a demonstration at the B.K.C.C. All-Britain Championships in Manchester. This gave Sankukai much greater recognition in Britain. One of the spectators at this demonstration was Alan ‘Butch’ White, a well known figure in British karate and a former member of the Great Britain team. Like Nanbu himself, Butch White had also become disillusioned with the increase of emphasis on sport in Shukokai karate. In April 1976 he took a number of students to a three day training course at Alan Hunt’s dojo in Luton. Following this course Butch White and his clubs changed to Sankukai  and joined the A.I.K.S. Over the following years Nanbu visited Britain at least twice a year and was often a guest at Butch White’s dojo in Kidderminster. Sankukai continued to flourish in Britain and Butch White Became Assistant Chief Instructor to the A.I.K.S.(GB). However, by 1980 Nanbu had developed a new system known as Nanbudo and the A.I.K.S. was disbanded. Despite this the majority of students in Britain were still committed to Sankukai and the British Sankukai Karate Association was formed with Butch White being appointed as Chief Instructor.